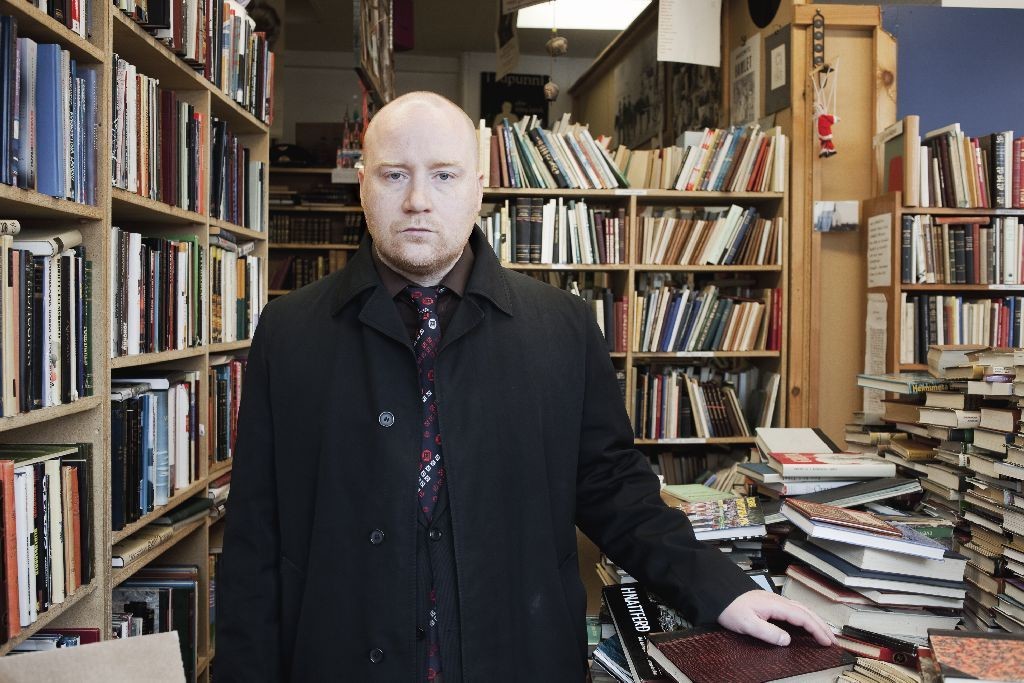 Like so many of you, we were devastated to hear the tragic news on Saturday of the early passing of our longtime friend, the brilliant Icelandic composer, Jóhann Jóhannsson at the age of just 48. It’s hard writing now, with feelings still raw, trying to do some kind of proper justice to him, and without doubt others will write much better and deeper memorials (I urge you to go and read Joe Muggs’ beautiful obituary in The Guardian). But it feels important to try to find some words in admiration for this wonderful man who became a giant in his field, whose work has touched and inspired so many and who has been taken away far too early, with so much still to give.

Whilst we’ve mostly communicated irregularly and from a distance, I’ve known Jóhann since the late ’90s, when FatCat were heavily active out in Iceland, having discovered Sigur Rós and then Múm. Back then, there were a bunch of really interesting things fizzing away in the cold air out there, out in the margins. The most interesting of these was Kitchen Motors, an adventurous experimental music collective run by Jóhann, Hilmar Jensson and Kristin Björk Kristjánsdóttir. I think our first meeting was out in Reykjavik when Kristin invited me to come out with a bunch of FatCat artists for a live collaboration with their own acts in an old cement plant. Jóhann played then with his Apparat Organ quartet and whilst I didn’t much care for them, the can-do energy of Jóhann and Kristin was addictive and hugely impressive. They were powerhouses – pushing angles, seizing initiatives, driving creativity forwards, making stuff happen.

Our paths crossed only occasionally in the following years, but Jóhann had left a big impression and I followed his albums with interest. When we started up our 130701 imprint in 2001 and based it around the notion of a new approach music being made with classical instrumentation, he was one of just a handful of artists who were active in that area, following some parallel trajectory. His two albums for Touch, ‘Englaborn’ (2002) and ‘Virðulegu Forsetar’ (2004); then two more on 4AD, ‘IBM 1401, A User’s Manual’ (2006) and ‘Fordlandia’ (2008) witnessed an ever-increasing growth in his powers as a composer fusing electronics and classical instrumentation in a way that was powerful and unique.

Jóhann eventually signed to 130701 in 2010, a decade after our first meeting, after his publisher David McGinnis at Mute Song hooked us up. I don’t know if I ever thanked David enough for that re-acquaintance, but in hindsight it was a key moment for the label which until then was operating only irregularly as a satellite of FatCat. Jóhann had a bunch of different projects on the go, one of which was ‘The Miner’s Hymns’, his score for Bill Morrison’s film on the Durham mining industry. This was a brilliant project and in so many ways an ideal fit for the label. It was to be the first release of a three-album deal with Jóhann and arrived at a time when everything seemed to be suddenly joining up and falling into place for 130701 and the wider ‘post-classical’ scene. He joined a roster that included Max Richter, Hauschka and Dustin O’Halloran, just as this genre – and an audience for it – was expanding exponentially. Unfortunately, just a year or so after ‘The Miner’s Hymns’ release in 2011 and a mere month after a heavyweight 2012 EU tour featuring Jóhann, Hasuchka and Dustin, FatCat found itself caught up in a legal battle that ultimately led to the imprint losing all our leading players. Devastating as it was to have to do, parting ways with Jóhann was entirely amicable – every dealing with him was amicable – and we maintained regular contact. But it remains a massive regret not to have been able to work together further, and not merely because of the wave of success that would subsequently break for those artists.

For a label that’s long attempted to prioritise creative integrity and the pushing of boundaries, Jóhann was a dream artist to work with. He always strove to expand and renew his music, appeared obsessively driven, with a voracious appetite for intriguing cultural source material. He seemed to have already read, watched or heard any of the books, records or films I mentioned, no matter how obscure. He knew exactly what he was doing and delivered stunning, sophisticated material that was complete, in need of no revision, no further shaping. There was an economy and precision in all that he did – both the way he carried himself and spoke and of course in his music. Despite his intensely single-minded focus, Jóhann was a genuinely lovely, generous, calm, quiet and gentle man. He was immensely likeable and always interested in discovering new things and filling in gaps in his gargantuan knowledge. Those were the times when you’d see him light up, his interest piqued, and a day or two later I’d get an email, probing further. Despite the increasing success and the burgeoning interest in his work, Jóhann always appeared incredibly humble and gracious. I never once saw him angry or flustered and I never once heard anyone say a bad word about him. Truly, he was one of the good guys.

Back in 2010 and for several years after, I don’t think any of us could anticipate the waves Jóhann would make in the film industry, after years working on smaller indie features. Breaking through into Hollywood with his scores for Denis Villeneuve’s ‘The Prisoner’ and James Marsh’s ‘The Theory Of Everything’, he was becoming one of the industry’s go-to composers and helped carve a space for other new, nonconformist composers. In 2014, he received the first of many awards nominations, winning a Golden Globe for his ‘The Theory Of Everything’ score which also received BAFTA, Grammy and Oscar nominations. Further BAFTA, Golden Globe and Oscar nominations came the following two years and last year he won the World Soundtrack award for his work on ‘Arrival’. Whilst such gongs are no real measure of quality or success and certainly not something he would have been consciously striving for, I have no doubt the next few years would have seen the words ‘Oscar-winner’ preceding his name.

Jóhann looked at ease in that limelight but I don’t think it was ever motivation. It was always about the content of the work, the resonance and rendering of the story, the idea. Drawing regularly on themes of loss and obsolescence, on human struggles and follies, his music married powerful intelligence with a deep and complex emotional charge. Whilst it had the power of ascension, its viscerality was perfectly suited to film and the heavy bass fidelity of cinema sound systems, and he understood that format like few others. Go hear his ‘Sicario’ soundtrack in a theatre for proof of that.

I last saw Jóhann in Gdansk in August, just days after it’d been announced that the Blade Runner score he’d been working on was being replaced. We were both there for 2 days and I’d hoped it would be a good chance to share time together, but Jóhann spent almost the entire time in his hotel room, working on film scores. I caught 20 minutes with him before he went onstage. He looked drained but his show was incredible, a masterclass in atmosphere and emotional weight and the best I’d ever seen him play. I’d arranged to meet him backstage afterwards, but within minutes of finishing his set he was in a cab back to his hotel to carry on working. After a break in our communication, I mailed Jóhann again last Thursday to talk about the Donald Crowhurst story he scored on his latest soundtrack for James Marsh’s ‘The Mercy’. A long while back I’d gained access to the audio recordings the sailor left on his bleak, counterfeited solo voyage, and wanted to know if Jóhann had heard them. It was just another of many shared points of interest I knew he’d be interested in, and I was looking forward to his mail back. The following day he was found dead in his Berlin apartment and the conversation – all conversations – ended.

It’s difficult to comprehend this reality. As a composer, Jóhann was at the peak of his powers. Over the past 10 or so years we’ve witnessed an increasing flood of new artists creating piano / orchestral work with a modern sensibility. Even towards the top of the pyramid there’s a level of similarity if not replication and reduction to a set of familiar tropes. Jóhann was one of the few who stood out well beyond that. He’d forged his own distinctive space, never compromised and thoroughly deserved the attention he was getting.

From the deluge of sympathetic messages as news of his death emerged, it’s clear Jóhann’s music has touched countless lives. From humble beginnings 20 years ago, he had come a long, long way and achieved so much. His work has graced and enhanced some great films (and a few that were not-so-great yet worth watching on the strength of his music alone), and he leaves behind him some incredible albums – a legacy which will continue to enchant and inspire. Despite that legacy, it’s a tragedy that Jóhann has been taken so young when he had so much more to give. It seemed to me that his work was getting stronger and stronger, that probably his best work still lay ahead of him. I’m grateful that he left us so much beauty within which we can always feel his presence. But I’m gutted that we’ll never get to hear that new music. It is a big loss and a big void we are left with.

I feel privileged to have worked with and shared a little time with Jóhann. He was a brilliant composer and a wonderful human and our sincere thoughts go out to his family and other friends, who I know will be suffering terribly.
RIP Jóhann, from all of us at 130701 / FatCat Records.