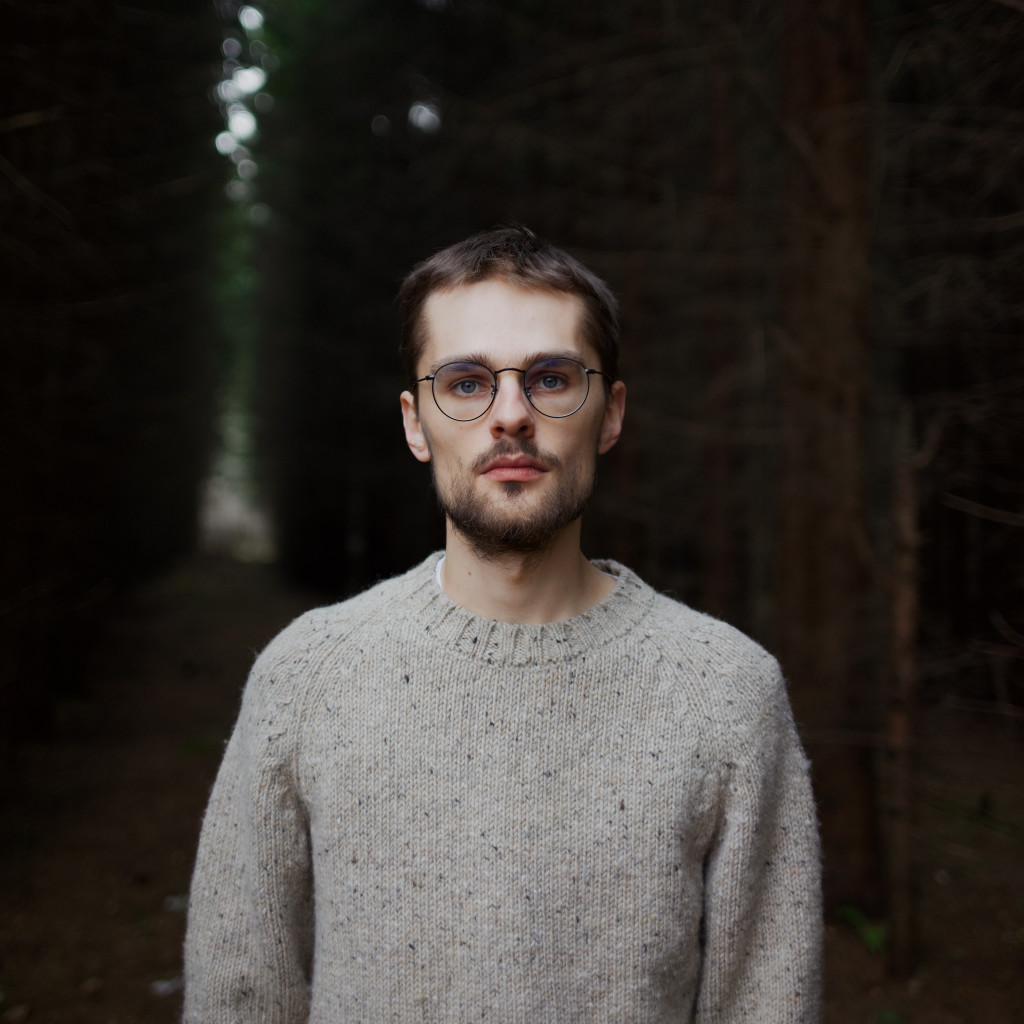 Dmitry Evgrafov’s stunning ‘Surrender’ LP came out last month + the Moscow-based composer has written some notes to give insight to the record. LISTEN / READ about each track below.

1. Splinter
The opening track on “Surrender”. One of my main goals is to make the album bolder, louder and more complex than everything I’ve done before that, and putting the track with odd time meters, drums and bass guitars as an opener is sort of a statement. Also it gives a great momentum to the album listening experience. I was always fascinated by tonal percussion like marimbas, xylophones and glockenspiels, I love how they sound and the way they interact with each other when they perform polyrhythmic melodies. Second part incorporates drums that feel off, as if they are constantly stumbling upon something.
2. Sparkle
I love the percussive, slightly tribal feeling of it. As some say, music is a balance between familiar and unexpected. Here I try to use some very simple formula and keep the orchestration, chord progression and feel fresh enough.
3. Whirl
Initially recorded during an improvisation session in Berlin Lichte Studio by Martyn Heyne, later transformed with FX into some multi-layered piece. I like the internal movement in it, hence the name Swirl.
4. Context
Such an unexpected wake-up call after previous piece! Conceptually the album is different from “Comprehension of Light”, which had a strong narrative arc and was a portrayal of internal struggles ending in metanoia. “Surrender” is more externally oriented. This time, it’s a reflection of topics like human culture, environment, global ecosystems dying at an unimaginable pace, technological progress, inequality, suffering. For example, triptych ‘Context’-‘Anthropocene’-‘Stymie’ is my musical vision of a simple realization that, perhaps, human development came way too far and has lost itself. Also, have we reached the point where we don’t know anymore what do with the momentum and all the tools and instruments that human mind created?
5. Anthropocene
The name is self-explainatory. Following “Context”, the track continues on a gloomier side of of the album. Sonoristic Ligeti-inspired choir is starting and some distorted strings and electronic beats continue the narrative. Think of some Blade Runner scene, right?
6. Stymie
In “Stymie,” you hear a sample of a neural network that is gradually learning to speak, and you can witness a computer going through the phases resembling child speech development: sounds, letters, words, sentences. This uncanny image is contrasted by distorted guzheng, one of the oldest instruments in the world, played by William ‘Memotone’ Yates
7. Humble In Heart
Some beautiful tonal percussion again. Now, this track is a good break from dark tones. With the help of strings (which are played by amazing Opensoundorchestra), the composition is full of melody and some sort of hope. One of my favourite tracks from the album!
8. A Rural Song – in the past few years, I’ve been nurturing and exploring the inner balance, clarity, kindness, and a certain equanimity towards the external distresses. I believe that art should comfort the disturbed and disturb the comfortable. “A Rural Song” is about that: to me, it sounds like an academically arranged version of an ancient folk song, I imagine simple people singing it centuries ago by the lake at dusk. This vision is deeply rooted in nature, in life cycles, and life forces themselves, and I believe that there is a key hidden that can help us to grasp the painful unanswered questions of today.
9. N.510
A simple piano piece. I like the pace, like a peacuful stroll with the loved one.
10. Endless
There was a particular conceptual challenge in “Endless”: the basis of the track’s canvas is a procedurally-generated soundscape, endlessly playing by itself and powered by computer algorithms. And yet it sounds beautiful and in sync with acoustic instruments like piano or ronroco. I love this ronroco part especially because it was played by Aukai, he always has a special tone, it’s just magic to me.
11. Serene Air
To me, “Humble in Heart”, “Serene Air” and “Endless” are the hymns to the art of Surrendering. It’s straight and simple, yet giving a sense of depth. The unobstructed flow of sounds is soothing and somewhat affirming. It feels as if you slowly disappear in warm ocean waves
12. Far And Close
This track invokes a strange feeling on me: I love it very much, but even as a composer I can’t crack the magic behind it. I had numerous conversations with people about this track and all of them could not pinpoint the exact reason why this track penetrates so deeply inside. I called it “Far And Close” for this exact reason. When listening to this track I imagine some guru or spiritual person, who lives reclusively in the mountains and who has a deep connection with ethereal but who still remains in this temporal material body. He’s neither here not there, he’s simultaneously Far and Close.
Listen
Live Events
Resina
21 Jul Tauron Nova Muzyka - Katowice, PL
02 Sep Up To Date Festival - Białystok, PL
Shida Shahabi
25 Sep Hidden Notes Festival - Stroud, UK
Clarice Jensen
25 Oct Kulturkirken Jakob - Oslo, NO
26 Oct Dr Studie 2 - Copenhagen, DK
27 Oct Fasching - Stockholm, SE
28 Oct Passionskirche - Berlin, DE
31 Oct Tivoli Vredenburg - Utrecht, NL
01 Nov RNCM / Stoller Hall - Manchester, UK
02 Nov Pavillion Theatre - Dublin, IE
04 Nov Queen Elizabeth Hall - London, UK
Rutger Hoedemaekers
09 Nov 30CC - Leuven, BE
11 Nov Lantarenvenster - Rotterdam, NL